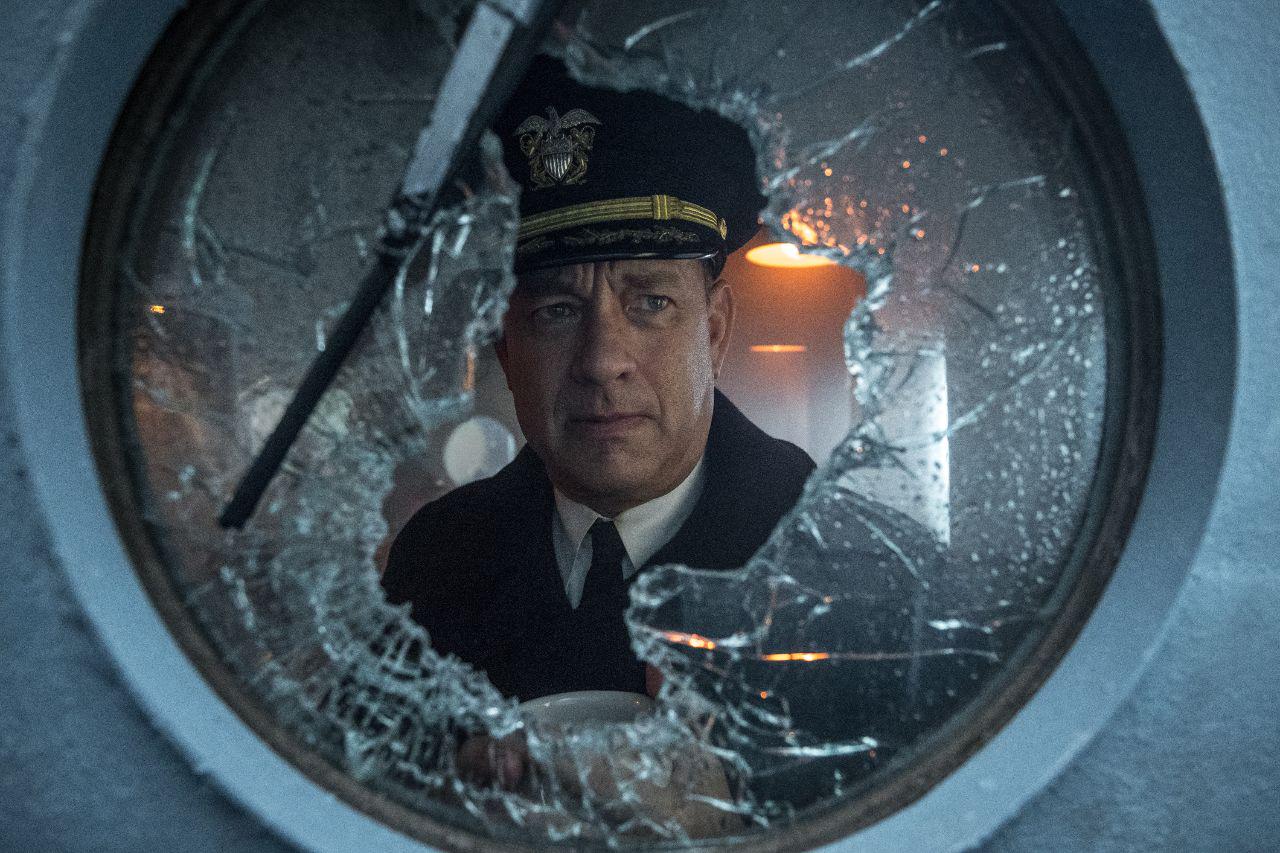 It's a little late to write about Greyhound – Tom Hanks' first screenwriting credit – which released on Apple TV+ this past Father's Day, June 21st. Though I definitely left my quite severe obsession with WWII history in my prepubescence, I thought I'd remark on this film because I originally hoped it would fulfill a role I'd long wanted for: the destroyer-side compliment to U-boat films like Das Boot and U-571. James D. Hornfischer's exceptional account of the U.S.S. Samuel B. Roberts' part in The Battle off Samar with The Last Stand of the Tin Can Sailors was my last dive into naval history. It's one of the most astounding war stories I've ever encountered, and upon first seeing Greyhound's trailer, I was sortof hoping it was the Big Boy film adaptation its always warranted. (Though apparently there was a TV movie made in 2005???) Instead, its based on (distinct from “adapted from,” apparently) a 1955 novel by English author C.S. Forester entitled The Good Shepherd.

Tom Hanks made sure to imbue his first screenplay with a shitload of “opaque naval jargon,” as The Guardian's Peter Bradshaw's review put it. A brief “investigation” by The Cinemaholic suggests that the U.S.S. Keeling – the film's singular setting – most resembles a Mahan-class destroyer, though none actually bore the name. For the actual photography, the production made use of a surviving example of the most mass-produced destroyer of all time:

When it came to shooting the film, instead of relying completely on sets, the crew of ‘Greyhound’ found another option. They used USS Kidd, a real WWII destroyer, to film the journey of Greyhound. She is a Fletcher-class destroyer and is named after Rear Admiral Isaac C. Kidd, the first US flag officer to die during the Second World War.

As much as you're going to loathe it, I must include this commentary on Greyhound's historical accuracy if only because – as a undoubtedly mainstream film – its been so widely and competently reviewed, already, by real film writers. I am almost positive U-boats would rarely – if ever – waste their precious few viable torpedo shots firing ultra-close-range at the agile, super-speedy destroyers and destroyer escorts that protected supply convoys, and I am sure that none ever bothered with audibly addressing enemy ships over the radio in English. I understand that dramatizing historic events is the core function of Greyhound's genre, but this particular addition was so unbearably cheesy that it utterly decimates all of the experience's hard-won context. Just look at a snippet from the first of two dialogues in text:

This is Gray Wolf.

We hunt you and your friends Eagle, Dicky and Harry.

We watch your ships sinking into the deep.

We hear the screams of your comrades as they die.

How many of them will there be before you join them?

The Gray Wolf is so very hungry.

I'm sure there's an essential academic film function which only similar enemy taunts could perform and without which this screenplay would've been technically unsound, and – if I were allowed supposition – I would venture to guess that America's Favorite Dad felt pressured to bolster his first penning against easy gimmes for the Great Big institution of cinema criticism as much as possible. However, this shit is just disruptingly cheesy. Fuck it! Have the rest:

Your flock is not safe from this wolf.

We can always find you in the night to kill you.

Or will Dicky die next? Or Harry?

Did you think you had slipped away from this Gray Wolf?

No, you did not. You will not.

The sea favors the Gray Wolf on the hunt, not the hound on the run.

You and your comrades will die today.

The contrast with the rest of the script's imposingly thorough and relentlessly-paced naval action dialogue is far too abrupt to not be problematic. Even as obsessed as I was with naval history, I'm still too oblivious to the details of what is/was actually said on the bridge of a warship during combat maneuvers to tell you how authentic Greyhound's depiction really is (it's hardly ever shown on the screen or laid out in nonfiction, even,) which nullifies all relevance the realism would've had, otherwise. Director Aaron Schneider in an interview for Vanity Fair:

“If you decide to read Greyhound by tracking the dialogue—rudder commands and sonar distances—you’ll soon find yourself completely lost. Because that’s not where the movie lives. This screenplay was designed to beam you aboard the USS Keeling…and it’s up to you to engage with what’s going on and extrapolate how things work, so you can answer the question, ‘What the hell is going on here?’”

Though Letterboxd user brucewayn called it “boring” in the most popular review of the film to date on the platform, I found Greyhound to be quite engaging in an anxious, depressing sense familiar to classic war dramas like Saving Private Ryan and Black Hawk Down. The tedium of naval warfare's endless orienteering is rescaled to a battlefield of lesser distances – axis and allied vessels actually collide on several occasions and a U-boat crew decides to fuck it all and brawl it out with two parallel destroyers with surface guns instead of retreating after losing their ability to dive. (See: Titanic VI.) Through a combination of wartime compression and stitching, Greyhound is in large part a mashup of naval action at the extremes of what historical fiction will allow within its 48-hour setting. From Ben Lindbergh's review for The Ringer:

In The Good Shepherd, enemy torpedoes simply sail wide; in the movie, they graze the hull for even closer calls. In the book, Krause agonizes over, and generally resists, calling the crew to general quarters, wary of exhausting their energy reserves; in the movie, he doesn’t hesitate to summon his sailors to battle stations.

The result is an emotionally effective film constrained by a very specific dramatic aim: another war movie every father can juice for decades' worth of Sunday afternoons on the sofa. “As befits his status as America's Dad, Hanks has constructed for us the ultimate Dad Movie — all the action you could ever need or want, with no annoying characters hanging around, harboring pesky needs and wants of their own,” quips Glen Weldon for NPR. Undoubtedly, though, the subject matter is fresh. I wouldn't say my youth desire for a surface-side Atlantic-theatre film is 100% satiated, but Greyhound managed to accomplish much more than I expected.