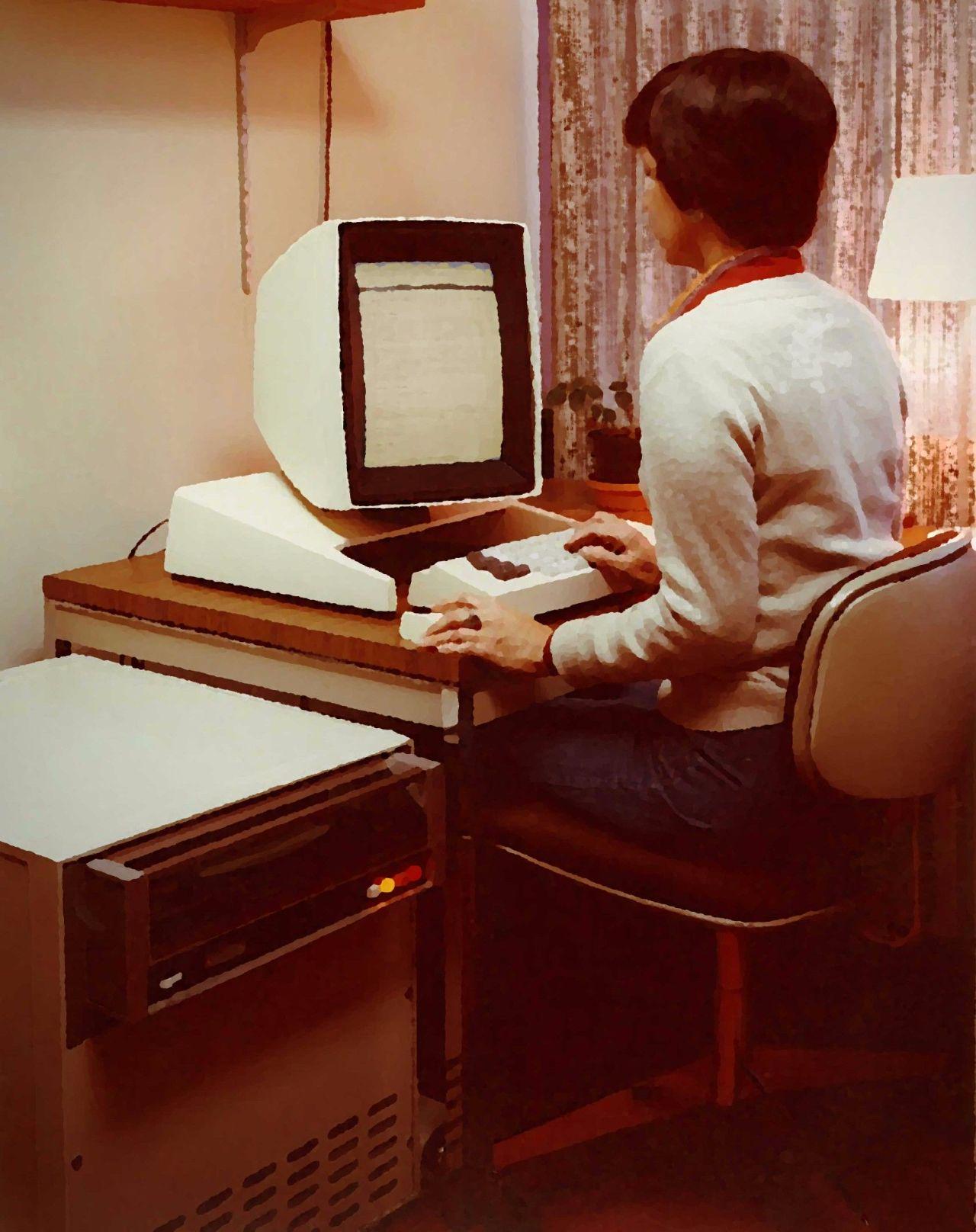 In all likelihood, you have heard of Electronic Mail, but I’ve noticed that much of our audience (and 18-25 year olds in general) have been consistently estranged from it, despite its prevalence in news media. Perhaps it’s not immediately evident as the coolest thing, but if “staying informed” and grass roots-ing brands are still as hip as they appear to be, email newsletters should soon become so groovy that you’ll begin leaving the house for a down-the-street coffee shop just to be seen reading them.

Welcome to the wonderful world of aggregation.

In many ways, email newsletters are the antithesis of (and medication for) Facebook’s school of ruminate aggregation. You know – the doctrine that will forever be remembered as the original intellectual catalyst for the downfall of human civilization. The skimming and the jumping… how many Facebook users could I fool by simply sending featured images, headlines, and abstracts for social cards without any hyperlinked destination? Could I manage to get Donald Tump elected President of the United States by way of Scrolling Hypnosis, alone?

Staying informed is a habit of time-honored traditions. Gramps has stopped by Bill’s General Goods every weekday morning for twenty years with a handful of change because The Sleepyville Monitor is a part of his identity – dependent upon- and accountable to his trust. We’ve continued into 21st century news media as if a digital equivalent of his readership would be so difficult to fathom that legacy publications are best-off forcing the standards of print onto the web instead of investing in research/experimentation, which is why the fucking New York Times still sends your handset away to a separate mobile version of their site – a horrible remnant of browsing from the oughts that’s rarely seen on blogs, these days, much less on properties of titanic news powerhouses.

For whatever reason, most of the industry has behaved as if Grandpa’s sort of routines no longer exist in day-to-day life, but – if anything – our Automated Hell is vastly more saturated with them, no? Unless you’re sequestered away in a diligently self-made Email-Free Zone, you’re receiving shit daily. I, myself, am considerably proud of my ~60,000 unread emails, and I’ve conceded to the vast majority of the popup opt-ins I’ve encountered since shortly after our launch because I rarely found myself visiting/reading undesirable web.

“I don’t email” is a sentiment I hear from young people often, which is perfectly fine. I don’t vote!

If it’s true that “nobody wants that,” nobody should be participating in the democratic process. Yes, I’ve experienced the no patience for more than 300 words phase of life, and I understand wholeheartedly the desire to retreat forever from it all. I would much rather exist in an old, open farmhouse with a wife, a garden, no internet, dusty old literature, and two ancient Bentleys than spend all my time crafting mirages in a black mirror, but neither cowardice nor negligence are options for us, right now. This country doesn’t have room for any more.

That’s not to say that you should be expected to read 6 hours of news a day – it’s the media’s (our) job to maintain our own accessibility, and for this, daily/weekly newsletters are an unbelievably effective method. The meta-aggregators in today’s industry are often paid exclusively to ease your digestion, both independently and by mastheads.

Dave Pell is a superb gateway from the former – an aggregation legend. His daily correspondence – called NextDraft - is more often than not the ideal front page of the day. 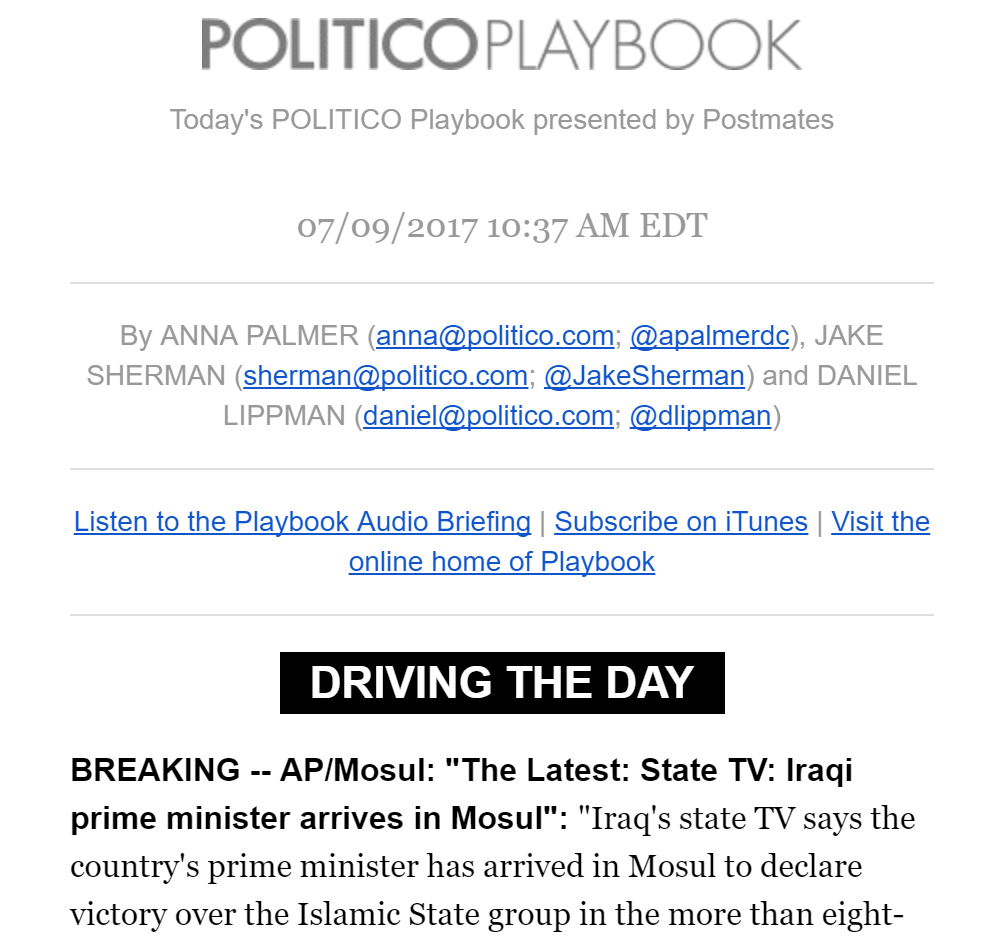 I’m asking those of you youths yet without your own reading habits to trust my taste – if not my authority – and explore some options from my own inbox.

Ultimately, you just can’t replace a legacy die-hard-news shop for a good political briefing. The POLITICO Playbook is the most time-efficient way to keep up with U.S. and World politics as you walk about your life, and many of The New Yorker’s newsletters are a great longform, much more visual compliment. For a slightly less-chaotic, but still relatively unproven alternative to the former, try Axios AM.

National Geographic may seem a bit old guard, but has remained a consistently excellent photographic publication. Its print edition has no place but on the poll in tangible media subscription terms, but it has been quite depressing, as of late. Turns out, we’ve made quite a dystopia for ourselves, and their ability to encapsulate the world can be overstimulating, at times. If you’d like a bit more control – or are uncompromisingly digital-only – its web edition has matured quite competently, and is elegantly parsed by their newsletters. (You’ll need to create an account, if you don’t already have one.)

It’s no secret that Medium has been on the decline, lately – and it’s always required a particular sort of tolerance – but The Daily Digest still delivers a few important essays, occasionally. And of course – there are options by regularity and topic, which you can fiddle with here when logged in.

On the more innovative end of the industry, there’s The Outline’s newsletter, which – being the property of a more deliberate, gorgeous, open-web publication – is a bit underwhelming, but then again… why aren’t you just looking at the site, anyway? The Pudding’s output may be sparse, but – again – just… look at it. I can’t claim to have made much use of the information presented in their gorgeous visual essays, but it sure is fascinating.

The Verge’s Command Line is often so clever, it can almost make tech news engaging. (Our very own The Tone is directly modeled after it, visually.) WIRED’s newsletter isn’t bad either – it’d be excellent if its parent website wasn’t so fucking broken.

Then there’s War Is Boring - a tactical/tech news site? I recently discovered. “From drones to AKs, high technology to low politics.” I wouldn’t describe it as a primary read for me, but it’s still nice to see what the Big Boys are up to, once in a while. (I am mostly just waiting attentively for the U.S.S. Iowa to be put up for auction.)

If you’re a filthy word nerd like myself, it’s likely you’ve seen a Tweet or two from the Haggard Hawks account – Paul Anthony Jones’ highly-educated musings on “obscure words, language & etymology facts.” After an excellent few years of playful indulgences, the project now has a whole DweebNet with a newsletter that always fascinates, if a bit dryly. What did you expect?

The Poetry Foundation can also be easily convinced to send you their Poem of the Day, and biweekly newsletter.

And finally… the meta media folks.

Columbia Journalism Review’s always the prettiest to look at when it comes to coverage of industry, and their squeaky-clean perspective won me over quite quickly. They send their ultra-clean, editor-compiled Weekly Highlights every Thursday. The American Press Institute’s list isn’t a bad idea, either. Then, of course, there’s Harvard’s NiemanLab, which offers afternoon and Saturday morning emails. All three often cite the Pew Research Center, which offers its own palette of email lists, should you find yourself hungry for d a t a. Though, I do not, and I enjoy them.

Landing on the “homepage” of even the most familiar online publications can feel daunting and impersonal, but having an authority on the industry (hopefully, with some sense of humor) parse the torrent and deliver it unto your personal inbox can ease the reading process into a much more intimate, sensical, enjoyable, and productive expenditure of your valuable time.

For a publication of our scale, the routine of a newsletter can act first as a simple reminder of our existence, and mature into a way to reach out directly to our audience in a distinctly magazine methodology – one which pervades a real, consequential relationship with consumers.