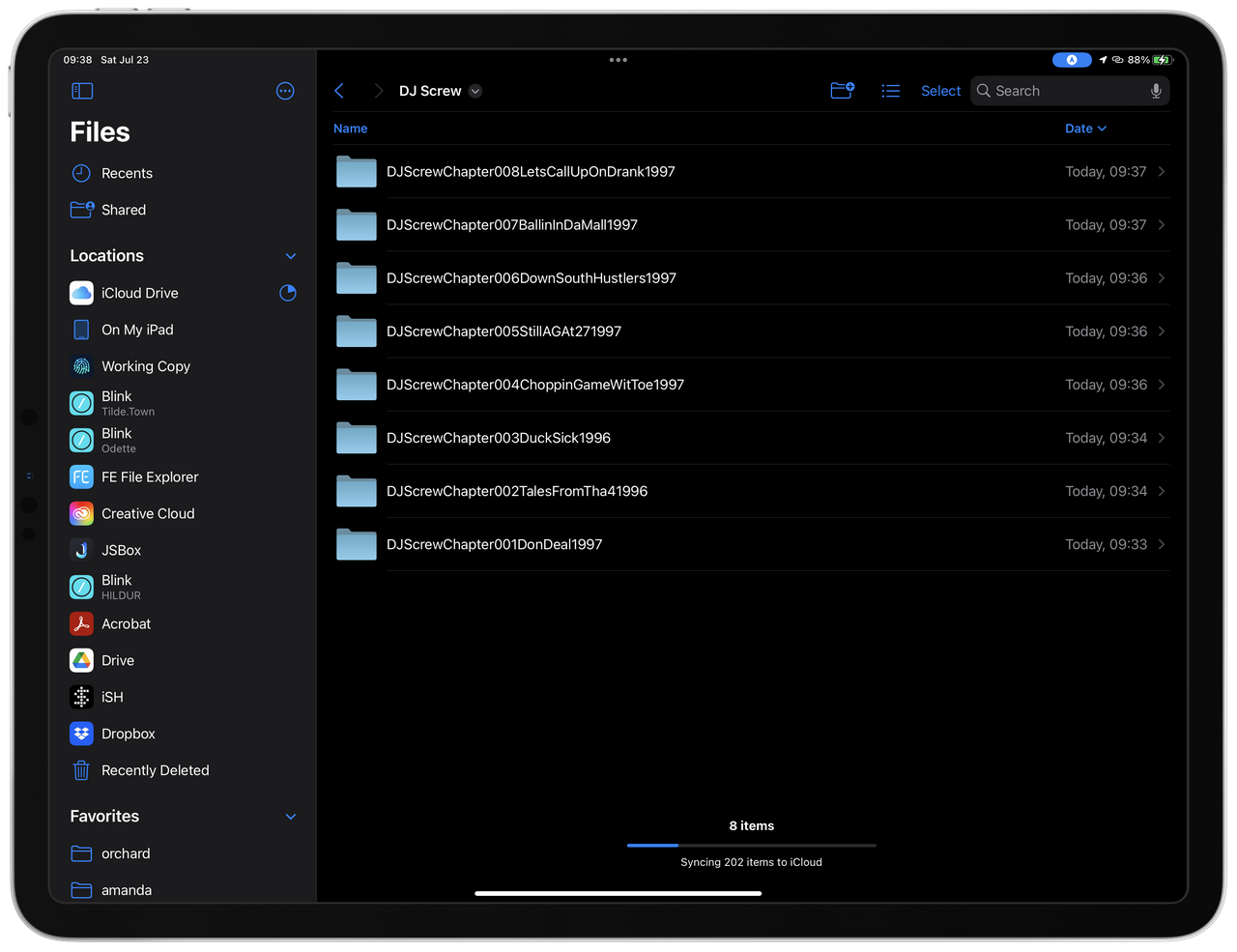 The most magical configurables I've ever created for iOS by a long way.

Though I don't believe I've ever discussed it, here, the continuance of the fandom for Houston music legend, DJ Screw, on into the 21st century is an issue I remain very invested in. I doubt you want to hear much about it, but the issue of actually obtaining audio files from the Screw collection is a worthwhile one to engage for context's sake. I was first introduced to the ~343-chapter collection by my high school best friend, who'd acquired it via an ancient Pirate Bay torrent some hero set up in the early 2000s[^1]. It was complete – probably – and more or less correctly organized by chapter, but that's about it as far as reliable metadata was concerned. The results one would find elsewhere on the web, from sites like DatPiff, were hardly any better – many, in fact, were obviously sourced from that same torrent.

In the interim, a lot has changed about music consumption. You know this, but – as you might've already imagined – none of the mainstream services you fuckers partake in have managed to do Robert Earl Davis III justice in the modern era. Apple Music and Spotify, both, will send you in neatly identical spirals pretty much regardless which of their pet vectors you choose to populate with His Name. As much as I've vouched for the former, it's perhaps the worst of them all in this context – departing the marque entirely into the (respectable but... incorrect) world of non-Davis SLOWED 'n” THOWED[^2] almost immediately.

Perhaps one day, I'll find it within myself to tackle this issue – DJ Screw in the Щ́̇͋ͯ̋̅Σ̾̒͋ͯͭ ̊ᄂ̋̈͐İͬV̏̆̊͛̍̌Σ̆ͣͣͭ͐ͫ̆̊ ͪͬ̿̈́̑ͤ̚IͫП̎̿͑ͦ͆̚ ͣͫ͌ͨ̈Λ̃͛̓ͦͪ͒̑̽ ͛̑ͤ͊ͭƬ̒I̅͌̊̑ͧͪM̈́̓Σ̋̏͂͐͊͆ͣ, generally – but I actually have extremely wonderful, urgent news. You see, dearest archive.org was actually provided the entire, impeccably tagged Discography by actual Culture Heroes some years ago. All of it, accessible in multiple file formats, embeddable, superbly shareable! This is the most important truth I have to impart to you today, really, but – for iPhone, iPad, and Mac users, there's even more... 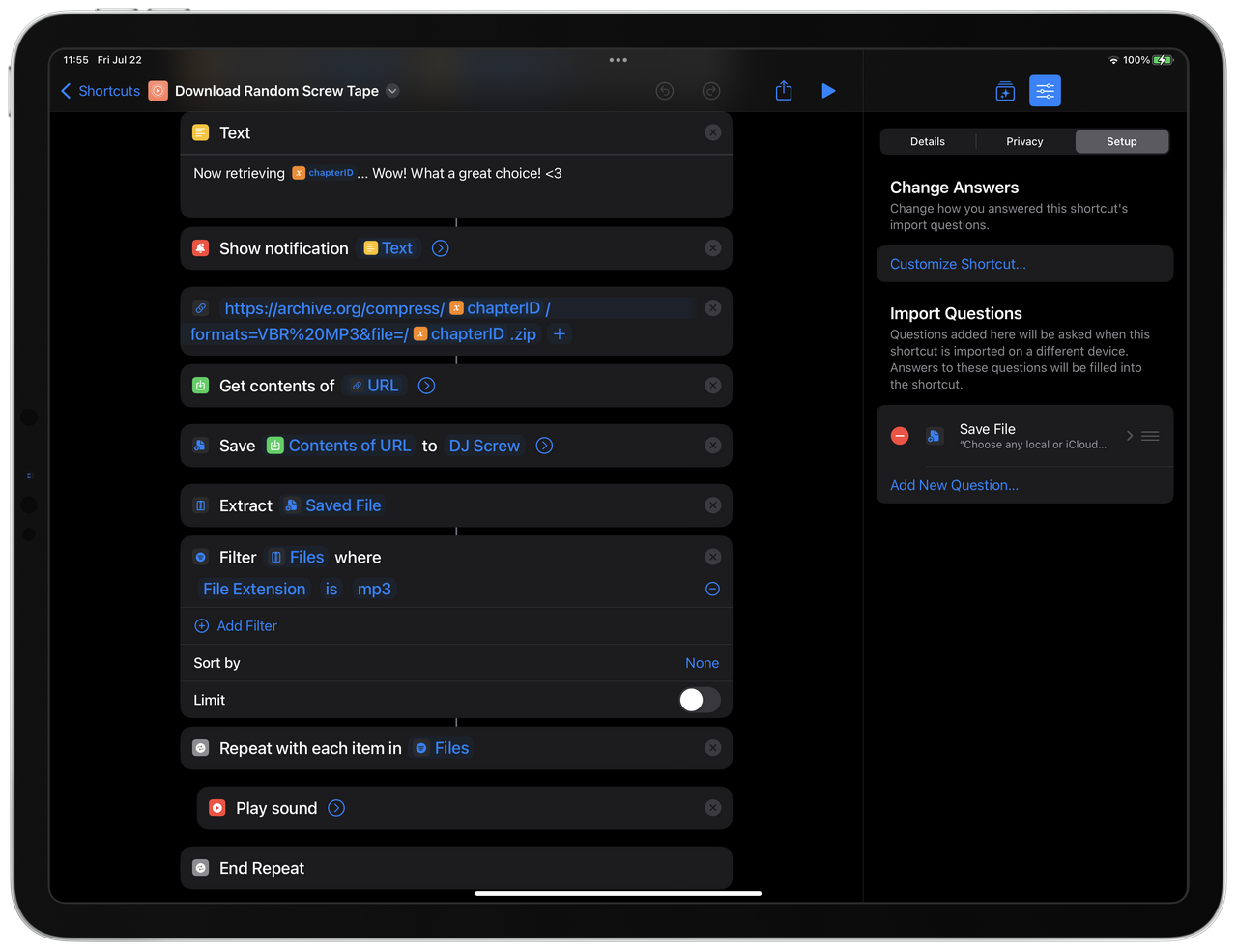 As of right now, just two Siri Shortcuts – Download Random Screw Tape and DJ Screw Discography[^3]. The first is perhaps the most delightful – if all goes well, running it right out of the box should result in a random tape from the library downloaded in a folder of your specification (at install,) as well actual playback, in correct order, within the shortcut, itself.

This is magic, yes, but the second is true power. After picking folders at installation for 1) downloaded archive.org-sourced .zip files to live in temporarily before they are extracted and deleted and 2) your complete, correctly metatagged DJ Screw Tape library could – in theory, anyway – magically appear in a single, undoubtedly several hours-long run. I have yet to actually test the full bit myself, technically, but I can advise you to set Auto-Lock (Settings ⇨ Display & Brightness ⇨ Auto-Lock) to Never, make sure you leave the Shortcut open within the Shortcuts App, itself, and give it a shot, if possible.

[1] I attempted to find this torrent for the sake of this post and well... The Pirate Bay looks a lot different than I remembered. [2] This is not criticism. If it was, it would be ridiculously hypocritical. [3] If RoutineHub is struggling/you find it untrustworthy, the direct iCloud Share links are here and here. Please contact me if you encounter any issues.